Work and well-being in the intelligent building

The research area work and well-being in the intelligent building is composed of several disciplines. Architects, civil engineers, psychologists and computer scientists examine the well-being and the user acceptance, in order to develop a system which can capture and analyze well-being of individuals and groups and then optimize 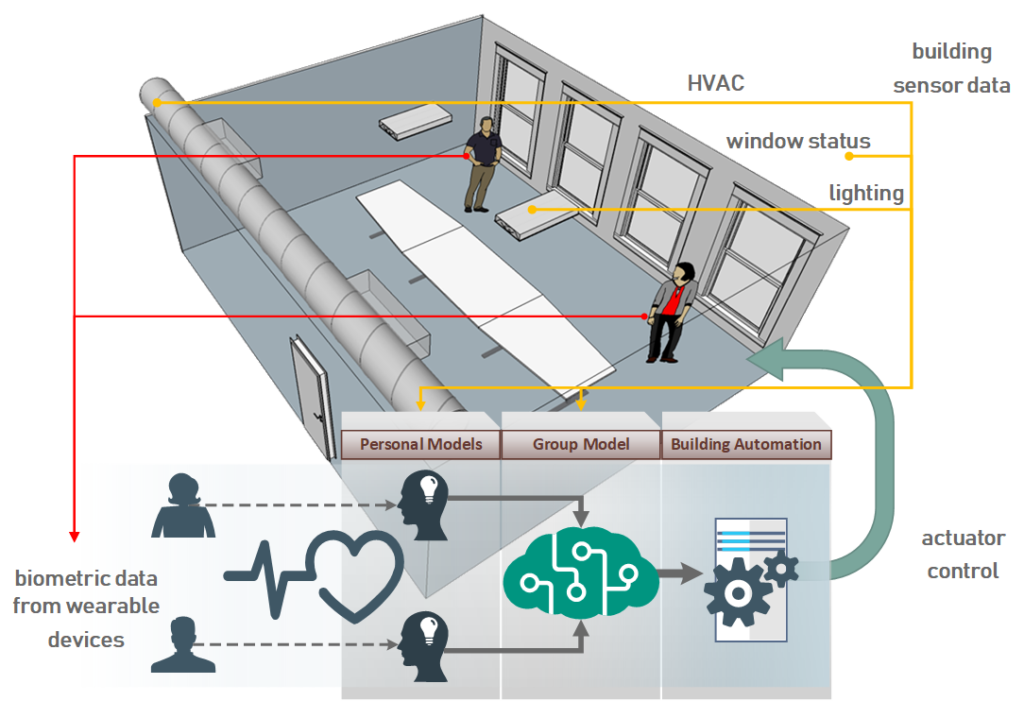 the building control. To achieve this goal, a correlation between sensorial measured values with subjectively perceived well-being must be established and also to find a way to identify well-being or malaise in groups of people in order to react with intelligent control measures.

In functional buildings, in contrast to residential buildings, there are a multitude of different living and working situations, to which usually several or many people are exposed at the same time. This is why the prediction of the well-being felt by residents/users of the building is very complex.

This research area now assumes the hypothesis that it is possible to draw conclusions about the current well-being by observing the behavior of people in these different situations using various sensors (including body sensors, wearables, smart devices, etc.). If this is possible, long-term measurements can be used to obtain rules for the establishment of a room climate adapted to the living and working situation and other factors, including currently measured parameters of well-being.

It turns out that most of the current research projects refer merely to partial areas of this problem. Some concentrate on single values like temperature, ventilation or lighting separately. However, the results are often encouraging, suggesting that recognition of general well-being could in principle be possible. Based on these results, we proposed a new approach to measure and detect complacency in order to enable smart buildings to react to the needs of the inhabitants and users accordingly. Datasets composed of personal data from portable sensors and wearables or from questionnaires, data from sensors of the building and additional information like the current utilization of the room result in a clustering problem which can be solved using methods and algorithms of supervised learning. An architecture for a system that meets these requirements was designed and first promising preliminary tests were carried out.

Publications from this project